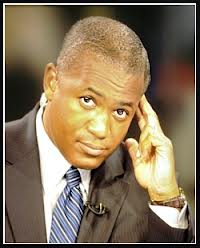 Former Charlotte TV news anchor and radio talk show host Vince Coakley announced Tuesday that he plans to run as a Republican for the 12th congressional district seat vacated by quasi-Marxist race pimp Mel Watt.  This is a great opportunity to showcase free market, conservative policies and principles — basically the meat of the GOP platform — in front of a mostly black electorate.  Will the NCGOP — or the RNC, for that matter — rise to the challenge?

Sadly, I doubt it.  NCGOP thought it was a great idea to invest a lot of cash and sweat equity in blue-stocking country club Rockefeller Republican Edwin Peacock III’s recent campaign for Charlotte mayor.  Peacock was more comfortable seeking the endorsement of gay groups than, say, The Tea Party.  He ran for Congress as a Republican in 2012 proudly promoting himself as a “moderate.”  He got his clock cleaned in his City Council reelection bid, his congressional bid, AND the mayoral race — in spite of all the help he got from the state party.   In post mayoral race interviews, Peacock had the nerve to bite the hand that fed him — laying blame for his defeat on Pat McCrory and the ‘extreme’ GOP agenda in Raleigh.

Some may say: Why bother with the Coakley race in the 12th?  It is overwhelmingly black and Democrat.  Well, Coakley can identify with half of that equation.  Bill Barber, Mel Watt and the rest of the race pimps have been telling these voters for years that voting Democrat is an important part of their black identity and a necessity for survival.  Just imagine these same people hearing from an attractive, articulate successful black man preaching the gospel of limited government and freedom — providing a credible alternative to the 50 year old option that has torn apart their families, and mired them in an existence dominated by poverty, dependence and crime?

Vince Coakley provides a great opportunity for the civil rights crowd to practice what MLK preached — about judging someone by the content of their character, not the color of their skin (or their party registration, for that matter).

Some could question the sanity of investing in Peacock’s run for Charlotte mayor.  Republicans are now in THIRD PLACE in terms of voter registration in Charlotte and Mecklenburg County.  Peacock has spent a good portion of his time in politics running away from his party’s platform and chasing his Democrat opponents to the left side of the spectrum.  How well has that worked out?

The state and national party should put some money into Coakley’s campaign to help with advertising and marketing.  Make the liberal plantation masters spend some time and money trying to keep their “flock” at bay.

One thought on “Coakley’s Run: A REAL opportunity for the NCGOP”