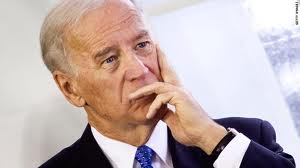 The mainstream media tries so hard to convince us that we have two geniuses currently occupying the top two offices in the land.  But ol’ Barry and Joe are just not living up to the hype.

One real weakness I see in our current president and vice president is a lack of geographical knowledge.  In 2008, Barry told us he had visited 50 states  — and had 7 more to go.  In a speech earlier this year, he described Hawaii as being part of Asia.   (*Yeah. George W. was the idiot.  Right.*)

The media and their Democrat allies worked overtime to paint GOP vice presidential nominees Dan Quayle and Sarah Palin as morons.  Republicans don’t have to do any work at all to make people think Joe Biden is an idiot.  From cursing into live mikes, to urging a quadriplegic to “stand up”,  ol’ Joe has provided us with a lot of laughs.

The latest bit of comedy involved a speech in Danville, Virginia, where Biden told the crowd: “With you, we can win North Carolina again.”

That’s right.  He was IN VIRGINIA speaking to VIRGINIANS.  ( if  George W. Bush had said that.)   I think this comment by Biden was right around the time he told the mostly black audience that Romney and Ryan were going to put them “back in chains.”

GOP presidential candidate Michelle Bachmann got ridiculed mercilessly in the media for getting mixed up on geography during a campaign speech.  The silence on this one  — from the mainstream media — is deafening.

If a Republican does it — it’s stupidity.  If a Democrat does it, it’s an honest mistake.  Performance art.  comedy. whatever.  NEXT …

Perhaps “Plugs” Biden was suggesting that these people sneak across the border and vote in OUR polling places in November.