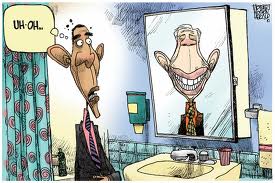 I’m old enough to remember the disgrace that was the Carter presidency, and I am sure many of our readers are. After seeing those photos of the mob overrunning the US embassy in Cairo, yanking down the American flag, my mind wandered back to similar images in Tehran in 1979  The more I think about it. the similarities between the Carter years, and our current situation, are striking.

THE ECONOMY.  In the Carter years, the economy was a disaster. Inflation was running amok,  government was growing by leaps and bounds, and the jobless rate was soaring.  We had a gas shortage and soaring gas prices.  Currently, we have a disastrous economy, government growing by leaps and bounds,  a soaring jobless rate and skyrocketing gas prices.

THE MIDDLE EAST.  During the Carter years, Washington backed an alleged democratic movement in Iran seeking to overthrow the pro-American dictator.  As thanks, that same”democratic” movement took over our embassy in Tehran and held American hostages for more than a year.  Currently, the Barry and Hillary Show has supported alleged “democratic movements” in Libya and Egypt.  The movements knocked off their countries’ respective dictators and took power.  In both countries — now controlled by “democratic movements” — our embassies were overrun on the anniversary of 9/11.  In Egypt, our flag was ripped down. In Libya, our ambassador was murdered.  The State Department’s response?  An apology to the mobs for an American film that reportedly disrespects Islam.

During the Carter years, America was disrespected and humiliated by foreign thugs.  Currently?

National morale was low during the Carter years.  There was a lot of excitement around the election of Carter in 1976 – thinking he was going to bring some great change to DC and the country.  (Sound familiar?) When 1980 arrived, people were excited about installing a new resident at 1600 Penn.

I’m hoping for the same kind of result we got in November 1980.  Seeing Romney surrounding himself with so many relics from the 1988-1992 Bush presidency is kind of disheartening and disappointing.  That era was certainly disheartening.  We need another 1980, but there are signs of 1988.  Team Romney needs to recognize they are benefiting greatly from a white-hot hatred of the current occupant of 1600 Penn. They need to understand — and act on — the messages from the grassroots, or it could be a very short stay in DC.  Ask those Bush I alumni about that.

It’s not about putting new hands in the federal cash box.  It’s about saving the country — before it’s too late.