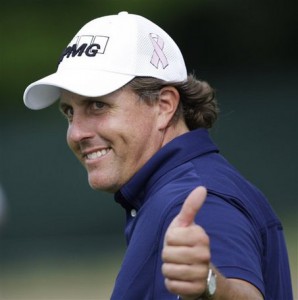 Low-information America and its enablers in the mainstream media are in a snit over Phil Mickelson’s complaint about the amount of taxes he is being forced to pay as a U.S. citizen and a native-born resident of California.   (His combined rate is somewhere around 63 percent!) *How dare this white man, who got filthy rich smacking a little white ball around, say  ANYTHING!*

One member of the mainstream media,  US News chief business correspondent Rick Newman, had an *interesting* take on the whole affair:

[…] The usually affable Mickelson generated controversy by complaining about the high taxes he’s forced to pay as a multi-millionaire living in California. With recent federal and state tax hikes, Mickelson claims that he now pays a total tax rate of more than 60 percent. The big chunk of his earnings grabbed by the government may force him to make “drastic changes,” he says, such as moving from high-tax California to someplace like Florida, which has no state income tax.

Hardly anybody feels sorry for a guy who earns roughly $50 million a year playing an aristocratic game most of us have to pay to enjoy. Mickelson, recognizing his gaffe, later apologized for griping. But whether he realizes it or not, Mickelson also highlighted a widespread problem that’s getting worse: the punishing cumulative toll of federal, state and local taxes, along with other rules imposed by all levels of government. Add them all up, and in some places it seems like there really is a government bureaucrat demanding something everywhere you turn. […]

One of the more appalling responses to l’affaire Mickelson I saw was from an executive at Golf Digest, who wrote THIS on Facebook:

“Phil Mickelson: WAAAANNNNH!  I have to pay a lot of taxes because I make a lot of money hitting a white ball around all day!”

*Nice.*   Obama-ite ‘eat the rich’  class warfare is alive, well and entrenched in big-time sports journalism.   Isn’t it interesting how lefties are intent on justifying salaries based on their view of what someone does for a living?   Never mind that Phil made his money legally by working day and night to be the best he can be.  Never mind that market forces allow him to pull in the kind of moolah that he does.

What Mickelson was pondering sounds a lot like what the successful people in Ayn Rand’s runaway hit “Atlas Shrugged” did.  They got tired of working their butts off and making a lot of money, only to have it confiscated by the government and sucked up by a bunch of parasites. So, they dropped out of the game. They looked after themselves first.

Phil  — like many others — should not be punished for his hard-earned success. Show of hands.  Who wouldn’t mind turning over 63 percent of their earnings to the government?

Economist Arthur Laffer expanded on that idea a little further with his legendary Laffer Curve — which postulated that there is a point where taxes become so excessive that people will stop working and earning money.  At that point, the incentive to work hard, grow, and prosper is GONE.

We’ve been seeing some good numbers off of Wall Street lately.  That’s kind of surprising, given how hard the government is working to kill off our economy.  I decided to pick the brain of my favorite wise old man, who I occasionally down a single-malt scotch with, about this.  Here’s his take:

“The wizards of smart in American business are simply ignoring Obama and the idiots in DC.  They have figured out how to work around the insane regulations and tax rates.  They’ve figured out how to turn a profit with fewer people on the payroll and fewer US-based facilities.   They’re serving their shareholders by turning a profit, while exposing themselves to abuse from class warfare demagogue politicians.  The average American is the loser in all of this.  Fewer Americans will be employed, thanks to DC.  And it will be harder to get a job in the near future.”

One thought on “Atlas Shrugging @ The PGA? (Elsewhere?)”