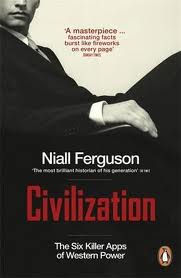 I — like a lot of free-marketeers — generally give a thumbs down to public broadcasting.  In the era of cable and satellite and Internet broadcasting HUNDREDS if not THOUSANDS of choices, PBS would seem to have outlived its usefulness.

Over the holiday weekend, I did encounter a great piece of programming via the PBS app on my iPad.  It was a documentary called “Civilization: The West and The Rest,” based on the book by the same name by British-born Harvard scholar Niall Ferguson.  Ferguson is a historian whose work focuses on the impact of finance and economics throughout the ages.

In the documentary — and his book — Ferguson introduces us to his six “Killer Apps” required for prosperity in a society:   competition, science, democracy, medicine, consumerism and the Protestant work ethic.   Ferguson suggests that the US and Western Europe dominated the world for so long because they were at the top of their game in each of these six categories.  In the documentary and the book, the Harvard scholar questions whether western civilization is losing its grip on the lead in these areas to Asia and the Middle East.

Ferguson uses several examples throughout history — The Ottomans, The Ming Dynasty, The Roman Empire — to illustrate how slacking off in any or all of these areas  can lead to the downfall of a great empire.

in an era where half of American households are receiving SOME kind of government “assistance,”  the Protestant work ethic is being dealt a blow.  In an era where our economy is being choked with regulation as well as more and higher taxes, consumerism, competition and the work ethic take a hit.

Ferguson’s work really gives us some food for thought as we face a very important election in November.